We live in a society, actually in a world, that is obsessed with beauty.  We have beautiful women modeling our clothes, beautiful men telling us which perfumes to buy, and even beautiful people telling us who we should elect as our president. And the only real qualification they have to meddle in our lives is that, by some majority rule, society has deemed them as pretty. This is nothing new and it'll probably never change. It is, however, one of the reasons I love to read and write romance.

In a romance, the characters are always beautiful, but not because society deems them so.  They're beautiful because someone finds that beauty in them.  That's one of the reasons I think the genre resonates with so many women. Regardless of body type, emotional baggage, or current life situation a romance tells you that there is someone who will love you for who you are.  They'll crave your curves or they'll surrender to the sleek plains of your body.  They'll hold you in their arms late at night and tell you you're beautiful and your P.E. teacher must have been stark raving mad to mock you in front of the class.  Yep, that really did happen to yours truly.

But there's something I've been noticing more as of late that has me on edge when I pick up a romance.  It actually happened to me twice yesterday with two different books I read. Okay, yeah, I read a lot but that's an entirely different blog.  The heroines of both books were curvy, voluptuous women.  Awesome!  Curvy women are sexy as hell.  I love curvy women and I love reading about men falling in love with them.  The thing I don't love?  That moment when we're in the hero's P.O.V. and he's thinking about how much he prefers curvy women to thin ones.  It often goes something like this:  "He never understood how some men could be attracted to those rail thin women.  He didn't like the feeling of getting poked by a woman's hip bones as they had sex." Or like this: "He needed a passionate woman. One who wouldn't snap like a twig if the sex got a little rough."  To be honest, this makes me sad when I read it.

It doesn't matter what your body style is, chances are that, at some point, you've been teased about it.  Now that we're adults, can't we can't we rise above that? Can't we embrace all women equally? Yes, a hero who is attracted to curvy, voluptuous women would probably not be as attracted to a modelesque one.  Everyone has their preferences and they shouldn't feel guilty about that, but do we have to knock the thin women down to elevate curvy ones?  Do we have to make thin women feel self-conscious about their bodies in order to compliment curvy women on theirs?

Why is this such an issue with me?  This is a picture I took of myself this morning: 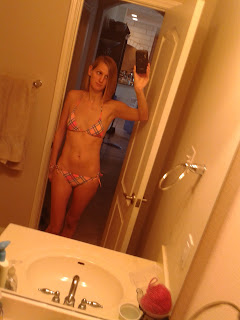 I am 5'7" and weigh 104lbs.  Yes, I am thin by just about any measure of the word, but I'm not a rail.  There's nothing feminine or even attractive about a rail.  Why would anyone ever compare any woman to one?  And I most certainly don't snap like a twig durning sex. Nope, not even when it's rough.

I get that I have a very specific body type and not everyone finds me attractive.  Yes, I have had men flat out (forgive the pun) tell me that they weren't interested because they like their women with a little more meat on their bones.  And you know what, it stung. But such is real life.  Whenever I'm reading a romance where the hero puts down thin women, it stings too.  Not only does it sting but, after reading it time and time again, I start to wonder if there's truth to it.  Yep, I've asked my husband if he can feel my hips while having sex.  He always answers no, but he's a smart guy.  He loves me and would never say something he knows would hurt my feelings.

Now for the disclaimer.  This is my body type.  I have always been thin and my children are thin. I'm a healthy active woman and, after my doctor told me my cholesterol is elevated, I eat a very healthy diet. But this is me. I'll never be considered a curvy or voluptuous woman.  I'm 36 and have had two children.  If it hasn't happened yet, it ain't going to happen.  And I have come to terms with my body type.  Like anyone else, there are things I love about my body and there are things I occasionally contemplate having surgery on.  I don't think I'd ever actually go through with the surgery but, you know, we all have our moments of weakness.  Mine is usually when I'm flipping through a lingerie catalog and realize they don't sell a damn thing that fits me unless it's push up and super padded.  I have a fantastic husband who adores me, however, and that does wonders for my self-confidence in those moments.

I don't want authors to stop writing stories about curvy women.  I love reading them.  I just want to be able to read them without having flashbacks of that P.E. teacher pulling me out in front of the class and saying, "Look, if you turned this girl sideways and had her stick out her tongue, she'd look like a zipper."