In which I had fun, got a new cover, and learned that I'm going to be in Thailand!!

...Or, at least, one of my books is going to be in Thailand and that's really the same thing, right?

This week has just flown by in a blur of fun and good news. And, having lived almost 37 years, I know that's not always the case. So when it is, it's important to savor the feeling.

First-the fun. Because having fun really needs to be a priority regardless of age. One of my oldest friends came to visit this week. He's actually my sons' Godfather. And on his list of things he wanted to do, he had hiking. So we all went hiking (kind of sort of ) at one of Texas' state parks. Why kind of sort of? Because this is what we were tromping over.

It was a challenge. It was also a lot of fun. But it gets even better because then we went to Six Flags. Not like, later that day. We weren't suicidal, people. We actually waited a day or two. But at Six Flag my youngest rode his first and second roller coaster! I worried the entire time that he'd fall out of one of the rides because he's a tiny little thing and because I worry. We all have our hobbies, that's mine :).  But he didn't. And it was an amazing day which concluding in fireworks because, yes, we did stay until the park closed. We also ate pizza, queso, and drank beer while my friend was here. I'm very fortunate that I have a fabulous husband who gets along with my childhood friends. Having cool childhood friends never hurts, either ;) And it does help that they both work in the computer field so whenever the Godfather comes to visit, the conversation is always about computer languages, systems, and innovations.

Now on to the good news. While my friend was here visiting, I got two amazing emails just a few minutes apart. The first was that the second book in the Universal Defiance series, Shared Objectives, has a cover! 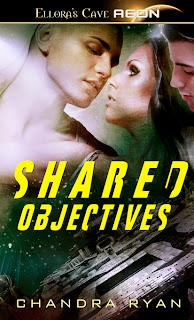 Isn't is sexy?!? Of course it is. Ellora's Cave covers are always sexy as hell :) And, yes, there are three people on that cover.

Allow me introduce you to Dixie, Ben, and Lisa. The two men are genetically modified soldiers who are part of the Coalition, a rebel military force. And the woman is one of the  government's top geneticists. Or she was until she was arrested and she and her infant son are placed in a high security government prison. Thankfully she and her child are rescued. Unfortunately for her, Ben is among the group of men who rescue her. She and Ben have a past, you see. One that didn't end very well when he found out what she did and who she worked for.

Dixie is Ben's superior officer and closest friend. He has no problem with who Lisa worked for or with her field of expertese. To him, she's the person who's going to help the Coalition level the playing field. She quickly becomes so much more to both men, though. And they'll have to decide if she's going to bring them closer together or drive a wedge between them.

Yay! So I'll be blogging and talking more about it as it gets closer.

My other bit of news is my Samhain book, Ravenborne, is going to be translated and released in Thailand! I'm so incredibly excited about this. As a writer, my number one goal has always been to share my stories and worlds with other people. Hearing that I'll be able to do this in an entirely new country was the whipped cream and cherry on top of the hot fudge sundae that was of my day.  I will, of course, keep you up to date as I hear news about this.
Posted by Chandra Ryan at 11:00 AM